Posted at 10:37h in Reno-Tahoe, Reno-Tahoe by Howard Goldbaum 0 Comments

Our annual fall hike up the flanks of Mt. Rose on the White’s Creek trail opens a magical land of brilliant aspen leaves, half fallen, half still trembling on their branches, about to fall onto their carpet of gold. While the destination of the hike is the small body of water formed by an ancient glacial moraine, we’ll explore Church’s Pond on another page. Although the fall colors of Northern Nevada will never compete the those of New England, the brilliant yellows and oranges of the aspen and cottonwood, prominent in their groves along the drainages, provide a striking contrast with the mountain sky, so blue it almost hurts.

As an added attraction to this hike, as if the pleasant gurgling of White’s Creek and its tributaries were not enough, a careful look at some of the larger trees in one of the aspen groves reveals a form of graffiti: the co-mingled carvings of modern lovers and other passersby and, on a few of the oldest trunks, messages left by immigrant sheepherders.

“Basque sheepherders have largely been absent from American folklore; their lonely travails did not easily lend themselves to dramatic interpretation. But there is one form of Basque storytelling that captures the imagination in a quieter yet compelling way – the Basque arborglyphs (tree carvings). Hundreds of thousands of Aspens stretching from Washington to Texas and from California to North Dakota, bear witness to the lives, longings and sentiments of these lonely carvers, immigrant Basque sheepherders who came to America to find a better life. Arborglyphs became a means for the sheepherder to humanize his landscape, declare the presence of his own personality amongst his natural surroundings, calling out to his fellow sheepherders and leaving a legacy for all those who followed in his footprints.” (This is an excerpt from an essay by Clare O’Toole, created for a class project in 2012.) 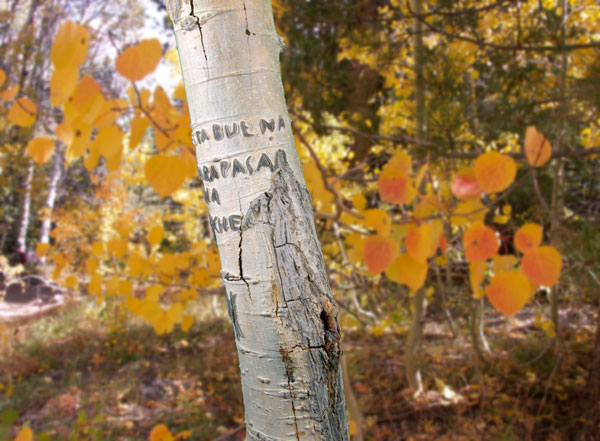 These two notable arborglyph specimens are located in the Mathewson-IGT Knowledge Center at the University of Nevada, Reno. The virtual-reality animated objects were created with the cooperation of the Special Collections Department, University of Nevada, Reno Libraries. Click on either of them to open the virtual-reality aroborglyph, which you may rotate by dragging.