The virtual-reality tour begins at a spot above the ruins of Fort Churchill. From there you can explore the various structures in detail, and see a period engraving of the fort superimposed upon an aerial viewpoint. You can also click one of the red hotspots to journey to the Carson River near Weeks Bridge on Rt. 95A with the cottonwoods at the peak of their fall colors. From this location you can click the red hotspot to enter nearby Buckland Station.

Click and drag to explore Fort Churchill and Buckland Station in virtual reality. There are 19 different locations within the tour.
Touch here for the HMD version.

The U.S. Army established Fort Churchill in July 1860 to protect wagon roads and settlers in the region following the bloody battles that year of the Pyramid Lake War between local miners and settlers, and the Northern Paiutes and their allies.
The fort, which occupies 1,384 acres on the north bank of the Carson River, remained active for only nine years before it was abandoned. Today this National Historic Landmark is maintained in a state of arrested decay by the Nevada Division of State Parks.
Buckland Station was a Pony Express stop, supply center, and former hotel. Samuel Buckland began ranching here in 1859. His first home served as an important way station for passengers of the Overland Stage Company. The Pony Express also used the facility for changing mounts. As Fort Churchill was dismantled, Buckland salvaged materials from the fort buildings in 1870 to build the two-story house seen today. The Buckland family lived in the house and rented rooms to travelers. The exterior and the first floor of the interior have been restored. 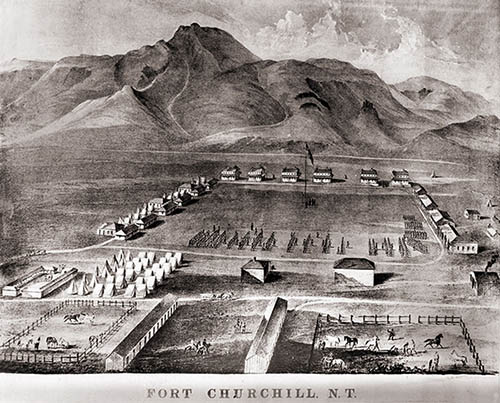 No known photographs of Fort Churchill from its period of operation exist today. This lithographic drawing of the fort was created by Grafton Tyler Brown in 1862. Our virtual-reality tour (above) incorporates the buildings from this lithograph as an optional overlay on the initial VR view of the fort.

The photography for this page was made possibly with the assistance of Nevada State Parks, in particular Scott Egy and Kristin Sanderson.

Click to view a panorama of the “sagebrush ocean” south of the Carson River where it flows by the fort.