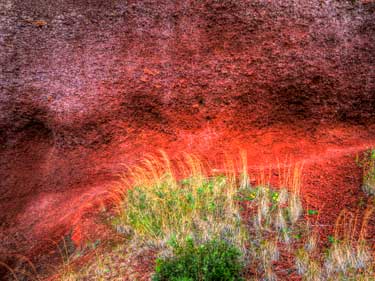 Located in the 116,000 acre Kahuku Unit of Hawai’i Volcanoes National Park, the Pu‘u o Lokuana cinder cone has an unusual history. It was created by volcanic activity on the flanks of Mauna Loa, the world’s largest mountain, which today remains an active volcano. The last major eruption was in 1868, disrupting life on what was once one of the largest cattle ranches on the island.

A cinder cone is the simplest form of a volcano and occurs when gas builds up, and the lava above it is blown into the air, breaking into small fragments (cinders). When these fall and solidify, they form into a cone with a crater at its top. At Pu‘u o Lokuana, the super-saturated red and orange colors result from iron oxidation naturally occurring in the cinders.

During WWII a secret radar installation was installed on the top of the cinder cone, supported by giant concrete blocks. These blocks, removed to the base of the cone after the war when cinder mining began, may be noted in the virtual-reality environment. Prior to the Kahuku Unit’s inclusion into the National Park, cinder mining reduced the height of the cone by 100 feet. The red cinders removed now decorate the paths of gardens and homes throughout the island.

Click the red hotspot to move from the rim of the cinder cone down into the mined area of the pit below.