I first became aware of Salvation Mountain and its creator, Leonard Knight, when they were both featured in Sean Penn’s 2007 film “Into the Wild.” On March 19, 2014, driving to Anza Borrego from Palm Springs, we took the long way around the Salton Sea to make our own trip up to the mountain. We were sad to discover that we arrived there four days after Leonard Knight’s memorial service at the site. The artist died at 82 on February 10th, two years after his failing health forced him to leave the mountain.

To explore Salvation Mountain in detail, find a red hotspot target just above the word “LOVE” on the Mountain. Or click the red hotspot lower down the Mountain, on the yellow pathway. To navigate to Slab City, click the hotspot near the horizon.

At the age of 36 Leonard Knight, originally from Vermont, experienced a spiritual awakening that settled upon him with the message that “God is Love.” He decided to spread this mantra by constructing what he planned as the largest hot air balloon in the world, with his message painted “in large red letters for all to see.” But before he could complete the project the balloon fabric began to decay in the Nebraska heat.

He arrived in Southern California in 1984 to continue work on his balloon. This also ended in failure, but still intent on spreading his message Knight squatted on some property near the snowbird trailer community of Slab City, outside Niland, California. For four years he worked on the original Salvation Mountain, made of cement, sand, and items the artist found at the dump. But in 1988, under the weight of all the cement and debris, the mountain collapsed. 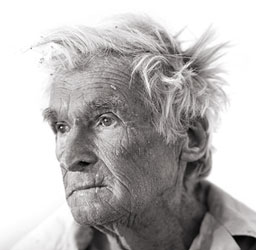 The next year he began a new Salvation Mountain, this one built using native materials: adobe clay and straw, which made the mountain—three stories high—much stronger. More than ten coats of paint cover the surface, protecting the adobe from the elements. The paint, estimated at more than 500,000 gallons, has been donated over the years by visitors and local supporters from Slab City and Niland.

The artist lived in the back of his truck, which is visible at the bottom of this page, along with a community of nameless cats, all enduring the desert heat or winter winds without electricity, running water, or even a phone. “We’ve just got to start loving God more,” Knight was quoted as saying, “and these things like wars wouldn’t happen. God’s love is the strongest force. It can squash hate.”

Now that Leonard Knight is gone, Salvation Mountain is being cared for by a non-profit group. Volunteers work daily to add layers of paint and straw, work that must be continued if the monument is to survive due to the unforgiving desert climate.

Most of those who are dedicated to the preservation of Salvation Mountain live in nearby Slab City, an “off the grid” community located within the remnants of an abandoned military installation. Most of its residents are snowbirds, who race back north when the 120° summer temperatures arrive. But a hard-core group of some 150 “slabbers” remain year-round denizens of this colorful post-apocalyptic outpost in the desert. News outlets have described Slab City as “as a miniature de facto enclave of anarchy.”

Our virtual-reality views of Slab City are centered upon East Jesus, an “experimental, sustainable and habitable art installation” first imagined by Charlie Russell in 2007, when he left his high-tech job and moved all his possessions to Slab City. Once there, he augmented his two Burning-Man style art cars with other found-art sculptures that would evolve into the East Jesus of today. The Chasterus Foundation, formed after Russell’s death in 2011, now oversees the art community. East Jesus, named not for any religious reason but to emphasize the remoteness of the location, is open to casual visitors, other artists, and even overnight guests.