Located close to the southeastern rim of the Salton Sea, near the town of Niland with its Salvation Mountain, these two square miles of gurgling and burping mud volcanoes are known locally as the Davis-Schrimpf Seep Field. They are not volcanic in origin; rather these natural formations are created by carbon dioxide bubbling up through a muddy slurry. Although some are hot, and they may look and sound similar, they are not the result of the same volcanic processes as the “mud pots” and “paint pots” of Yellowstone National Park. 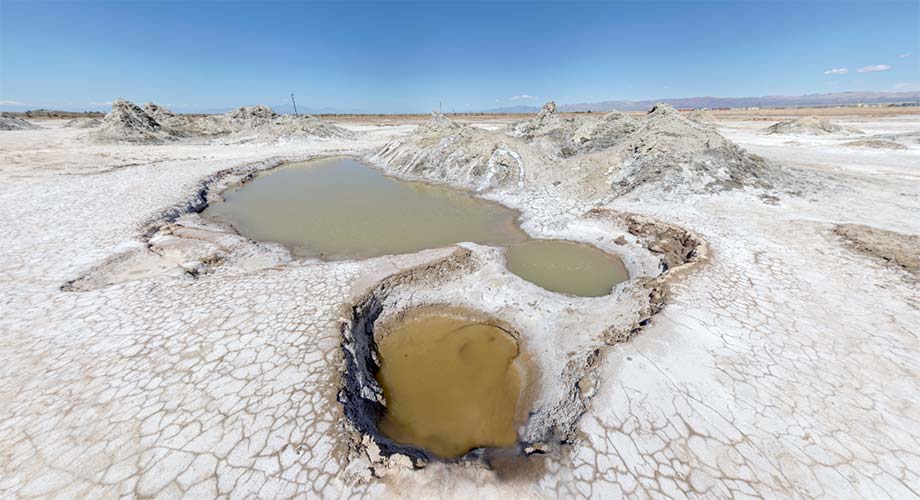 Click and drag to explore the mud volcanoes in virtual reality.
Touch here for the Google Cardboard version.
Click here to view the area in Google Maps.

Geothermal power plants may be seen in the distance while rotating the VR panoramas. These extract renewable energy from the superheated steam emanating from the magma zone a mile below. It is this magma that brews carbon dioxide from adjacent carbonate minerals, forming the gas bubbles we see bursting at the surface of the mud pools, mixed with methane and sulfur to create a foul reek around the volcanoes. You may observe how the volcanoes are formed, one spurt of mud ejaculate at a time, by clicking on the video thumbnail in one of the VR nodes.

The alien white landscape surrounding the mud volcanoes is evidence of a salt content so high that it forms a crunchy crystalline top layer. This “volcanic” area is extremely dynamic: visiting twice in a three-day period, we noted that one active mud-spewing cone was dormant on our second visit, replaced in activity by one several yards away. You may learn more about the geology of the area here.

While the Davis-Schrimpf Seep Field (near the corner of Davis and Schrimpf roads) is on private property, and the entrance is marked with a “no trespassing” sign, the mud volcanoes entertain a daily stream of curious visitors. Excursions during the summer months will likely be brief, as the mid-day temperatures may be above 110°F. Our three ground-based VR nodes were made in March, 2017. The aerial node was made during a visit in March, 2019. There are other mud pots—hotter, more explosive, and less accessible—near Red Hill Marina. These may be seen online here, and here.

Another 25 miles northwest along the Salton Sea will take you to the once-flourishing resort town of Bombay Beach, now so far from the water that formerly beachfront property is now some 500 ft from the shore. For the Google Cardboard version, touch here. 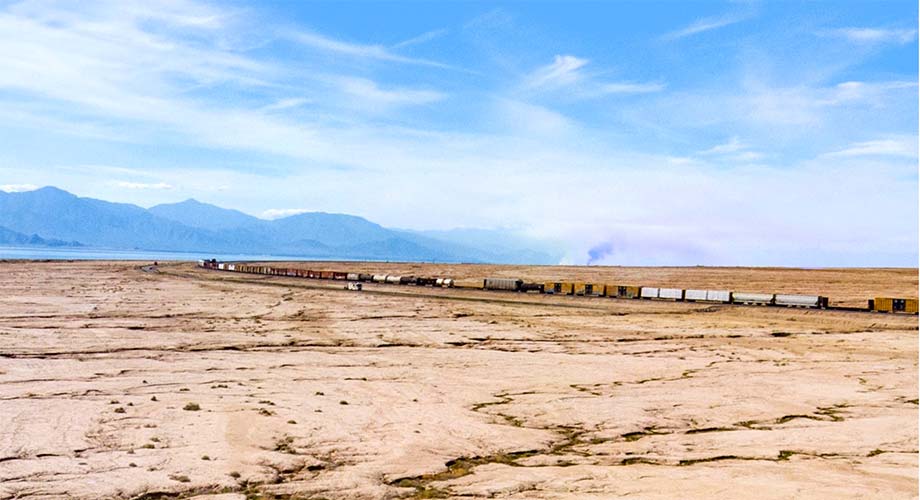 Nearby is the diverse waterbird habitat of the Sonny Bono Salton Sea National Wildlife Refuge.