Posted at 07:09h in Comstock, Comstock by Howard Goldbaum 0 Comments

Current regulations, dating from 1999, specify that a steam locomotive’s boiler be inspected, and required maintenance performed, when the locomotive has accrued 1,472 service days or when a period not to exceed 15 years has elapsed since the last such inspection was performed. The virtual tour inside the Virginia & Truckee Railroad’s Locomotive #18 was photographed during its 2015–2018 inspection and maintenance.
The firebox and the smokebox virtual reality interiors were photographed in April of 2016, with all the boiler tubes removed. The exterior photographs, as well as the interior of the boiler, were made in April of 2018, after some of the boiler tubes had been reinstalled. The aerial VR node was shot in August of that year.

Loading...
Click the red hotspot to enter the engine house. Then click and drag to explore Locomotive #18 in a 6-node virtual reality tour, with embedded “info” hotspots. Touch here for the HMD version. 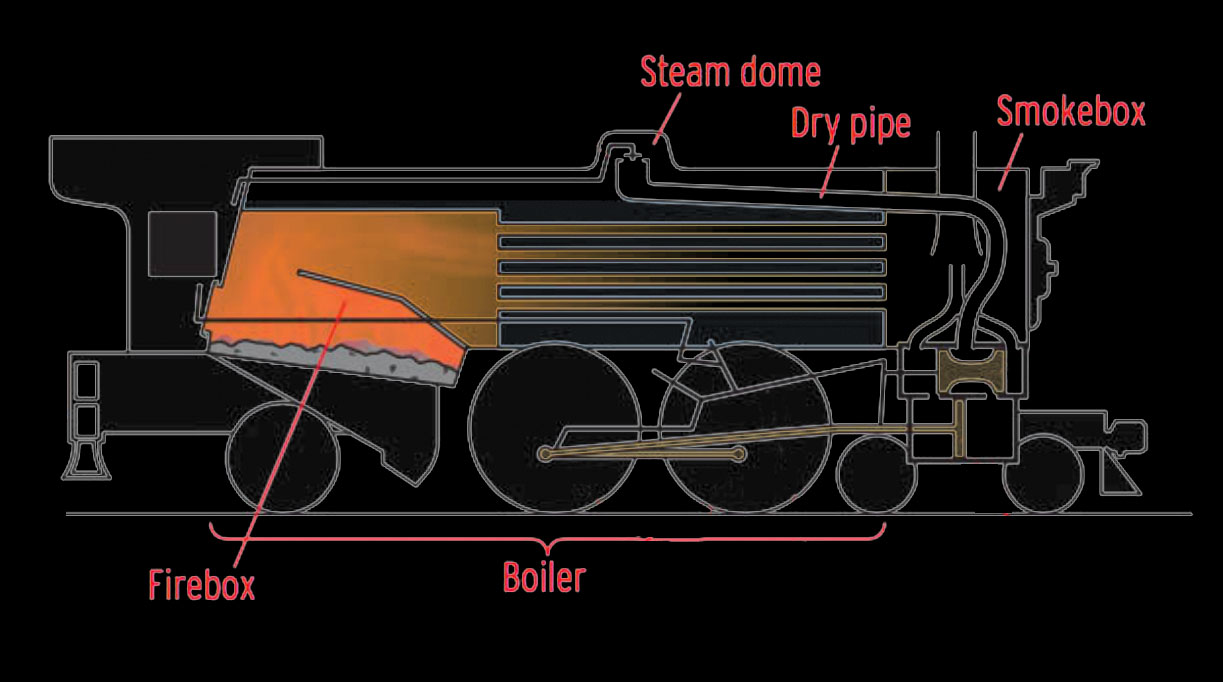 Virginia & Truckee Railroad locomotive #18 was built in 1914 by the Baldwin Locomotive Works of Philadelphia. McCloud River Railroad, its original owner, paid $16,871.79 for the standard 90-ton logging Mikado, which is a “2-8-2” type locomotive, indicating 2 pilot wheels, 8 driving wheels, and 2 trailing wheels. In 1915 the engine was sent to the Panama-Pacific Exposition in San Francisco, where it was part of a lumber industry display.

After this turn in the spotlight, #18 began a long career hauling logs, lumber, and other freight for the McCloud River Railroad. When the company purchased its first diesel locomotive in 1948, #18 was one of 14 steam locomotives on the line.

By 1954 the work formerly done by the 14 steam locomotives was being accomplished by 5 diesels. The #18 was stored and offered for sale or scrap. The Yreka Western Railroad purchased it, as well as its sister engine #19. These two steam locomotives were the primary power on the Yreka Western for only two years before the company purchased a diesel, which took over the most of the work. They kept both of the steamers around for passenger excursion trains, and to run the freight operations when the diesel went down for maintenance.

The two steam locomotives operated frequently until 1964, when the #18 blew a cylinder head. The YW lacked the resources to repair the damage, so the engine sat under a tarp in the Yreka yards for many years, slowly rusting away. The railroad was put up for sale in early 1998, but the #18 was to be sold separately. Ironically, the successful bidder was the McCloud Railway Company, so the #18 returned home to McCloud in March of 1998.

Over the next several years the locomotive underwent a major re-build and restoration in the McCloud Railway’s shops. McCloud was reported to have paid $80,000 for the locomotive, and then poured an additional $350,000 into the restoration. The locomotive was finally placed back in service in February of 2001, just in time for a special snow trip sponsored by a railfan club.

The #18 operated several times each year between 2001 and 2005. However, financial problems on the railroad forced the sale of the #18, and in January 2005 the locomotive was sold to the Virginia & Truckee Restoration Committee, which was re-building the historic V&T line between Carson City and Virginia City. With a 2007 detour to Oakdale, CA, for use on the Sierra Railroad, the #18 finally had her first tourist excursion in Virginia City on July 24, 2010. However, after a short period of operations it moved again, for the filming of the movie Water for Elephants, after which it again returned to Virginia City. The V&T Railroad is managed by Tom Gray, the son of the founder of the resurrected V&T, Robert Gray. Tom is pictured below. 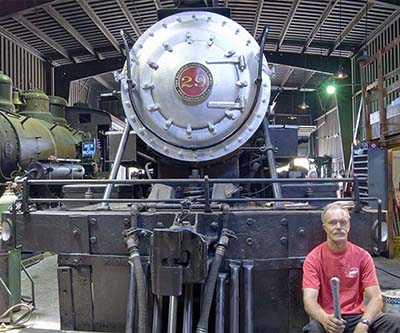 Tom Gray, the manager of the V&T, poses with Locomotive #29. Click to view in virtual reality.

Thanks to Tom Gray, Bill Heneks, Robin Goldbaum, and Lane Drasbek for their help with this project. Schematic of steam locomotive adapted from TRAINS magazine.